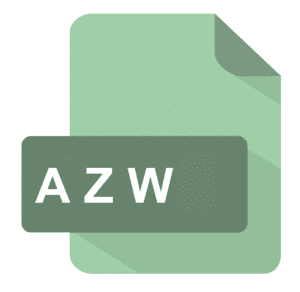 The AZW and AZW3 extensions are two proprietary EBook formats from Amazon and are exclusively used for Amazon Kindle devices.

Although it’s never been officially confirmed, AZW and AZW3 format are similar to the MOBI format, AZW format is adopted from Mobipocket EBook MOBI file format that has been DRM((Digital Right Management) protected and renamed from MOBI or PRC format. Android, IOS, and popular EBook management apps like Calibre and Alfa can read AZW and AZW3 format.

AZW is the first version of the two and was released in 2007 along with the first kindle, The eBooks with AZW format can store components like formatted text, bookmarks, annotations, last read position, page numbers that match up to the physical version of the book.

AZW3 format, known also as Kindle Format 8 (KF8), KF8 compiles the ePub files and generates a binary structure based on the PDB file format. it is the upgraded version of AZW EBook digital format which was introduced along with the Kindle Fire reader in 2011.AZW3 has more advanced features than AZW. It supports more styles, fonts, and layouts such as  HTML5 and CSS3 which were not supported through the standard AZW format. The AZW3 file format has an internet media application/vnd.amazon.mobi8-ebook. AZW3 files can be converted to other file formats like  AZW, EPUB, PDF, DOCX, and RTF.

Best AZW Converter: To read Kindle AZW books smoothly on other devices, you must have an AZW Converter Calibre is the best free AZW converter that will help you Convert AZW to PDF/EPUB/MOBI, However, there is an alternative Calibre which is Epubor Ultimate a much easier way to Use for AZW Converter.

About Calibre:  Caliber is a free EBook manager that also works as an EBook converter to convert the EBook formats. Calibre is capable of decrypting EBooks with a DRM removal plug-in, including Kindle AZW / KFX / AZW3. Let’s find out how caliber works as an AZW converter.

IBA File Format And Its Importance