Typesetting is the technique of arranging the textual content and photos on a page so that you can put together them for printing. This consists of deciding on the best enough style, size, and structure of every textual content, image, and design component. While typography may not seem to be a difficult process at first glance, the time it takes to properly create a document is not brief, as there are many aspects that the professional typographer must consider in his work.

The Basic Principles of Typesetting 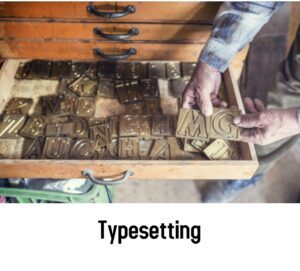 The process of selecting and setting a type for a document is referred to as Typesetting and is sometimes mixed up with typography, which refers to type design, as both foci towards the visual representation of the text for printing purposes. This requires choosing the most appropriate size and style for each text string and design element by an editor, typographer, or graphic designer. Though the Typesetting process may look simpler, it is a highly technical and time-consuming task. Failure to manage and edit the typeset will lead to visually unpleasant flaws in the text.

These unpleasant flaws in the text affect the reader’s experience and make a work difficult to read. And In some cases, the visual aesthetics of the interior of the document is affected due to poor Typesetting management. These Typesetting flaws can include kerning, the spacing between characters, and this problem can cause the letters on a page to appear uneven or cluttered. Other flaws include Drop caps, Word stacks, Orphans and widows, and Book blocks. using too many different typefaces in the same document will make the page layout look cluttered and distracting. In other words, the typeface looks nice but is very difficult to read. The poorly legible typeface dilutes the message the document is trying to convey. Usually, the experienced typesetter tends to find the balance between form and function.

The History of Typesetting

Coming onto Digital Era The next generation of photoTypesetting machines introduce to generate character on a cathode ray tube, this machine could be driven online by a computer front end or capture data from magnetic tape. Computer-aided photoTypesetting, in turn, quickly became obsolete in the 1980s by digital systems that used a raster image processor to convert an entire page into a single, high-resolution digital image, known today as image setting.

If you are looking for typesetting services contact us

IBA File Format And Its Importance